the power of companionship

In one single moment my resolve to finish was derailed.

What my groom and I set out to do last Friday was intended for companionship.

Exhaustion and muscle fatigue took him out of the draft and suddenly he was no longer at my side.

As I pedaled and tried to get a spin going versus doing all the work myself, I peered into the tiny mirror hanging on my helmet and squinted for him.

Turning my head just slightly I tried to get a glimpse of him in one of the two lanes behind me. He was out of sight.

My groom fell back and for the first time in 65 miles we were separated. What happened in that one single moment was huge.

Holding strong all those previous miles, I never once had considered moving over to the right to catch my breath. Until the moment my groom wasn't by my side. 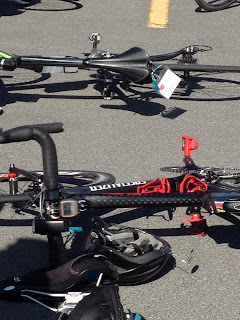 It can inspire you to keep on and give you a peace that you're not going through it alone.

Spirits linked, our ability to ignore self-doubt was strong when we were together.

But the instant we were separated, it was as though neither of us could go on. The discouragement we each felt was overwhelming.

I needed to know if he was okay. He needed my closeness to keep steady.

My choice to move over into the right lane was made because I felt so alone. Tears began to well up in my eyes and I was afraid my confidence was simply too unrealistic.

It was an overwhelming feat and a purpose-filled endeavor.

Riding our bicycles for 100-miles to bring a message of Hope to families of missing children was our honor. As parents, bringing awareness to people of all ages was our mission.

We learned many things that day, including that child abduction is not limited to race, class or marital status. Most of all, we learned the power of togetherness.

Riding our bicycles two-by-two with close to 500 other individuals at a steady pace was a life changing experience. 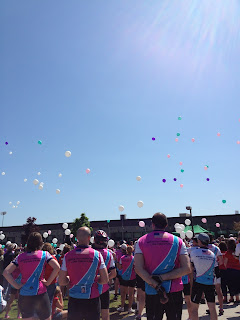 Wearing the same jerseys signifying The Ride's colors, we were a beautiful image as police vehicles escorted us and the community cheered.

On long and winding stretches, the hundreds riding in front of us snaking through the roads was a powerful sight.

At each school we rode by or stopped at, the children acted as though we were heroes.

In each town we rode through, the people gave thanks to us for what we represented when we thanked them for being there.

It was the largest team I've ever been a part of.

We each encouraged each other to press on.

I shared with my fellow teammates that my groom had slipped back. They knew the power of companionship and they stepped up to give me that boost that I struggled to find on my own. 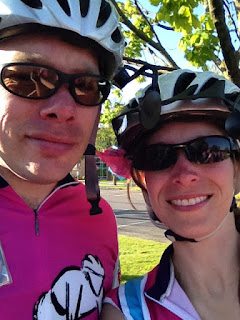 Eventually my groom and I found each other.
At that moment all was right in our world.

We promised each other that we wouldn't let the other fall back and that neither of us would work too hard to close a gap in front of us and leave the other.

Finishing together meant more to me than finishing at all.

Because, that's what companionship is all about.

Thank you, Father, for the miracle of encouragement you provide through companionship.

...how being a parent truly changes every. thing.

...how proud our son was for his Momma and Daddy.

...the opportunity provided for our Boy to *hear* us about safety.

...strangers becoming a team for a day. And a lifetime.

...how grateful I am for pain to remind me of other parent's "real" struggle.

...all that we've learned through this experience...