how work is good for the soul 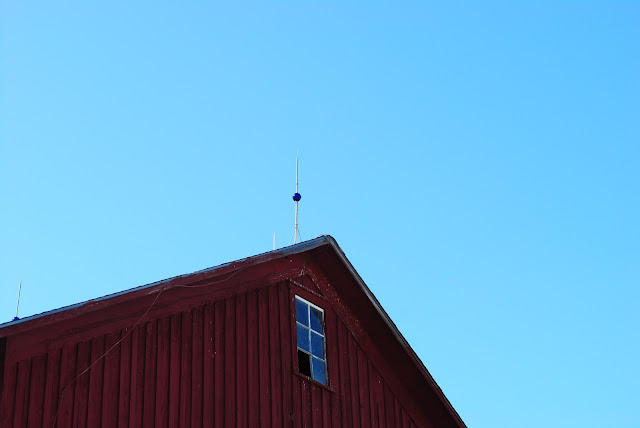 The smell of fresh cut hay hangs sweetly in the air, the tractor roars, and sunshine blankets the land.

Our extended family affectionately calls it The Farm. And though it's true that it is, I never really saw it that way because it isn't much of a working farm. There aren't cows or horses, pigs, or even chickens roaming around.

Years of maturity wrapped up in me, I survey the fields and realize that this land is worked. Most of it is rented off to local farmers now, though it's also still my father's work. It's still a Farm.

Each year, Dad cuts a handful of acres of hay at a time and sells full wagon loads to local horse stables, making baling hay a much easier process.

Times have changed to make the work lighter, but it's still work. And it's still getting done.

I breathe in and remember the days when we did all this hay baling work together, as a family. It used to be that all the hay would stay at our house for selling throughout the year. I'd help Dad stack it all in our family barns, usually on the hottest days, of course, because the work has to get done and the hay is always ready for cutting when it's a scorcher out.

Nowadays, Dad's got a system of doing the work by himself, though this time my mother decided to play nice, as I called it, and came down from the lake house to help. The times when she chooses to set aside her wants to support him blesses me to see. And mostly honors their story of togetherness.


My family in tow to bring a gift to Dad, we watch as he and Mom finish up the last row. Dad's white hair shows his age, though he's still strong enough to stack the hay and catch it as the kicker baler shoots out the bales quick and high.

Once a Farmer, always a Farmer.

I breathe in and remember the days when my grandfather would watch us all work together to get the job done. It would be blazing hot outside and there was Gramp, in his cardigan sweater and corduroy pants, pitchfork in hand to realign the rows of hay.


Gramp has been gone for a long time now and only Gram remains. She is 91 now and paces as she watches the land being worked. I notice how frail she has become. It's summer-like hot in June and she is freezing. Just like Gramp was at her age.


Dad does all of this work because his dad handed it all down to him. And it's Father's Day and life is a circle.

My groom holds our boy's hand and together they walk alongside the tractor as it pulls the baler and wagon. It's only a few times a year that the Boy watches the process and at only seven-year-old, he's not seen it enough to remember it with precision.

It took me decades of living to realize the house I grew up in is one of my favorite places. I moved out and away from our small town for a brief time, trying to make myself a new home, though Dad never did. To him, this is the only home he knows.

"He's in his glory," Mom says. And I know it's true. Dad loves this place.

Glancing up at the lightening balls on the barn, I suddenly remember why we spent so many days scavenging through antique shops when I was young. When Dad was a reckless kid he used them as his shooting targets. As he grew, he replaced them.

I breathe in and listen to the chug of the tractor. The hay flying around doesn't bother me in the least.
This is Home. Always has been. Always will be.

It takes work to keep up this home. And work is good for the soul.